It’s that time of year again! This is a super humbling post because I read almost 50 percent less in 2022 than in 2021 (last year’s post is here, if you’re interested in comparing the stats), but I want to reflect on what I have read, because 54 books is still a big accomplishment too!

Here are some fun stats from Goodreads before we jump into the real meat and potatoes of this post that is the charts from the superior book recording site that is The Story Graph:
Shortest book: I Would Leave Me if I Could – Halsey (144 pages)
Longest book: Saga, Compendium One – Brian K Vaughan + Fiona Staples (1,328 pages)
Average book length: 364 pages
Average rating for 2022: 3.5

One of my favorite aspects of The Story Graph is that you can rate books based on moods. It’s absolutely no surprise to me that most of the books I read were mysterious or dark considering my top genres were thriller and mystery, but I was surprised by how many were emotional or even reflective. And the irony is not lost on me that hopeful is the tiniest sliver on the entire pie chart.

The numbers here are absolutely skewed because of Saga. I bought the compendium, which was a whopping 1,300 pages, and rated it as one book, since physically that was how I read it. It’s technically the first nine volumes, or 54 issues, so if I wanted to get picky about my statistics, I could have individually rated them, and I would have had way more books under the 300-page category.

This chart is a complete non-surprise to me, because I generally never read nonfiction. In fact, only three of the books I read this year qualify, and one is technically poetry, but both of the other books I read were five-star books for me!

My genre chart surprised me because I felt like I toned down the amount of thrillers I read this year, but they were still my leading genre. I’m happy to see the LGBT+ genre ranked as high as it did, although that was mostly thanks to the readathon I did this year. Again, the comics number is skewed because of Saga. I was surprised by the amount of young adult I read this year, but I believe that was because I read quite a bit of YA fantasy!

This is the most depressing of all the charts. I started off really great in January, but in February I had a big change in my personal/work life, which put me in a reading slump, and I found solace in playing video games with my friends instead. I picked up again in May, and even hovered there for June with both the Asian Heritage Readathon and the LGBT+ Readathon I did in each month, but again, I had personal issues arise in both July and August, and I was never really able to come back from that. I’ve only read one book so far in December, and I hated it, which put me even farther into my reading slump. 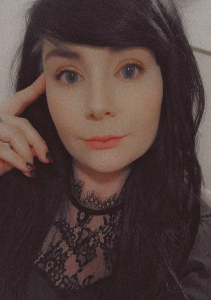 Hi! I’m Sarah, a twenty-something from the Midwest. I’m a fan of coffee, books, and Oxford commas. When I’m not reading or writing about reading, I enjoy travelling with my husband, occasionally braving the outdoors, and critiquing horror movies.